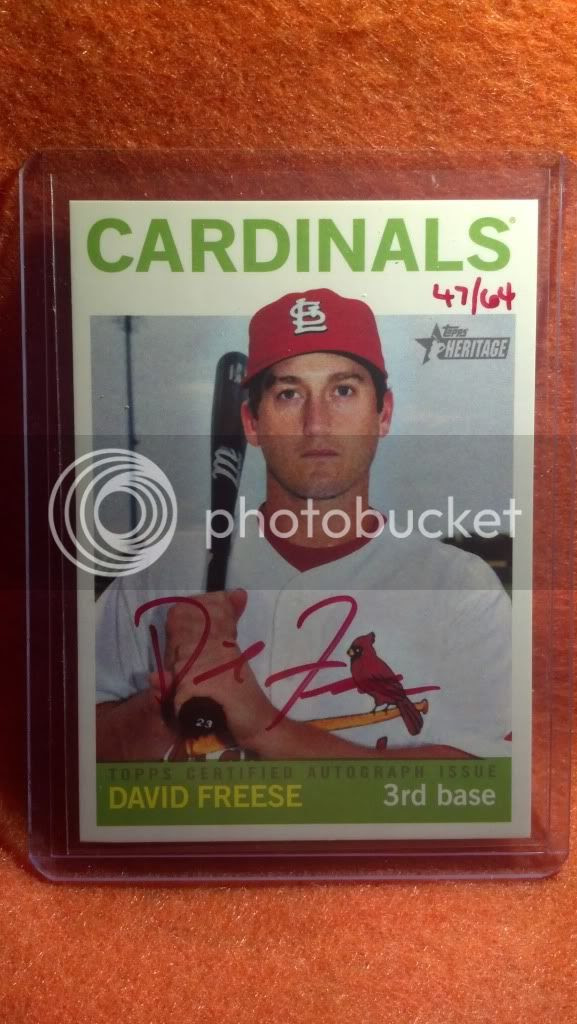 Today I was able to track down some Topps Heritage hobby boxes. These are scheduled to hit tomorrow, but many hobby shops will be getting them in today. I opened 5 boxes total.

I must start by saying the condition of these cards were much better than those I pulled from retail packs. There was almost no damage on any of the cards. The hit was almost always the 3rd card from the back. One of the boxes was a purple refractor hot box. It is really a pleasure opening these bonus boxes as the refractors do not take away from the hit, but instead are an added bonus and take the place of a base card. That means many of the packs have multiple hits in them. If you remember back a few years topps did the same thing with green refractors. The only difference is that back then topps gave us a watered down checklist. I am happy to announce that I pulled many super stars in my 24 purples...Pujols, Howard and even a Bryce! Even if you don't think these shiny cards belong in a retro set, you will find yourself gazing upon these much, as they are very beautiful.

I received about the right amount of inserts per box. I only average 1 refractor a box and only 1-2 chromes. The base chrome set is going to be very hard to complete this year. My two big hits were a red ink David Freese autograph numbered to 64 and a Josh Reddick mini numbered to just 100. Reddick is a top prospect right now. Topps did a great job mixing in hot prospets among the sets, even though they couldn't land any true rookies in the set. Bundy, Profar and Reddick will lead that list of hot cards. There are also box toppers like last year. Real 1964 cards which will average about one per two boxes. Boxes that don't have the 64 topper will have long ad panels.

I also pulled a few variations. These cards were turned around in my packs, so they were pretty easy to find. I pulled a Yadier Molina variation that isn't listed on any list. Don't you love surprises? I will again mention that the small number on the bottom of the card will change for SP's, SSP's and variations.

I was very impressed with these hobby boxes. There seems to be much more value in them than in past years. Topps has listened to collectors and put all the top players and prospects into the chrome sets. I still have yet to confirm if the purple chrome set is a parallel set or a skip numbered set, I tend to think it is the latter as most of the ones I pulled were stars.

I will try to post some more pictures and answer any questions. There is much to like this year in topps heritage. Go get some at your local hobby shop.
Posted by Heritage King at 1:12 PM